The Canandaigua Treaty of 1794 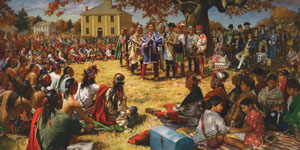 This program looks at the events that preceded the “Council of Friendship” that was held in Canandaigua, New York in the fall of 1794 between representatives of the United States government, led by Col. Timothy Pickering, and the many representatives of the Iroquois Six Nations. The program takes into consideration what each side had to gain by coming to Canandaigua, and just as importantly, what they stood to lose if they didn’t. The program ends by looking at the Treaty itself to see how a “lasting friendship” was assured through the seven articles of the Canandaigua Treaty that were finalized and agreed to on November 11th, 1794. (60 minute slide program) 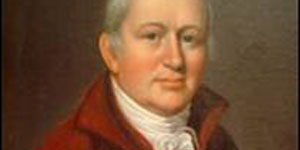 This program looks at the settlement of Canandaigua and its immediate outskirts following the establishment of the Phelps & Gorham Land Company’s Sales Office upon what became the village square. The program will look at how Canandaigua went from a frontier settlement characterized by Indians, mud, sickness, and hunger to one of the western New York’s more cosmopolitan and gentile villages thanks to the leadership of men like Oliver Phelps, Israel Chapin, Abner Barlow, Thomas Morris, Dudley Saltonstall, William Antis, Moses Atwater, Peter & Augustus Porter, and Nathaniel Gorham II. (60 minute slide program) 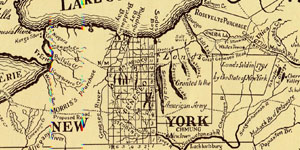 This program looks at how western New York was settled by men of wealth and vision. Their leadership transformed what was once the wilderness homeland of the Iroquois peoples into the thriving agriculturally-based communities that we still recognize today within just a few short decades. The program will look at the similarities and differences between the methods of the three primary Resident Land Agents that organized the settlement of western New York; Oliver Phelps of the Phelps and Gorham Land Company, Charles Williamson of the London-based Pulteney Syndicate, and Joseph Ellicott of the Holland Land Company. (60 minute slide program)

The Home Front during the
Great Wars of the 20th Century 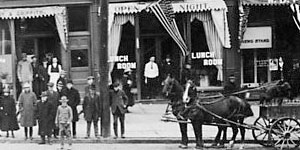 This program looks at what it was like to live in Ontario County during both the First and Second World Wars. The program highlights how life at home was characterized by worry, shortages, rationing, volunteerism, patriotism, resource drives, and celebrations. See how the people of Ontario County did their part for the war effort and possibly share some memories of your own. (60+ minute slide program)

On the Water Front

This program takes a historic look at life and development along Canandaigua Lake and the lake’s impact on the people of Canandaigua and surrounding towns. Known for its beauty, bounty, and ease of navigation, Canandaigua Lake has drawn settlers to its shores for centuries and its shoreline has become one of the most sought after pieces of real estate in the country. (60+ minute slide program) 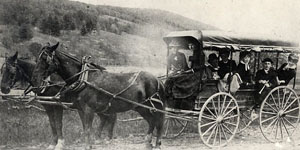 Take a trip back in time to a period when horse-drawn transportation was the primary way that Ontario County residents travelled from place to place, made deliveries, paid visits, received their mail, or spent leisurely time travelling into the country side. Learn about the many different kinds of privately and business-owned conveyances of the day and how businesses and professions related to horse-driven transportation added substantially to the local economy. 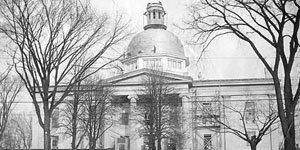 Have you ever wondered about the many beautiful buildings and homes of Canandaigua and what inspired their style? This is the program for you! This program will take a pictorial tour of the City of Canandaigua looking at the many 19th-century architectural styles that have collectively given our community the look of stateliness and grandeur. This one hour presentation will look at the architectural trends of the nineteenth century, which can be found from one end of the city to the other. The presentation includes images and explained features of the Federal, Greek Revival, Gothic Revival, Italianate, Italian Villa, Octagon, Second Empire, Queen Anne, Chalet Style or “Eastern Stick,” Richardsonian Romanesque, Colonial Revival, and Elizabethan Revival styles. (60+ minute slide program)

Have you ever seen the old postcard images of the electric trolleys that once made their way up and down North Main Street in Canandaigua? This program looks at the history of Street Railway systems (Trollies) in Ontario County from the use of mule and horse-drawn trolleys to the electric lines that transported passengers from Rochester to Geneva and points beyond. The program starts by looking at the creation of the Canandaigua Street Railway Company in 1866 and its successors, the Canandaigua Electric Light & Street Railway Company and the Ontario Light & Traction Company, which provided local service to Canandaigua residence up until 1904 and concludes by looking at the Rochester & Eastern Rapid Railway Company that bought out the local service companies and established trolley service from Rochester to Geneva until June of 1930. (60+ minute program). 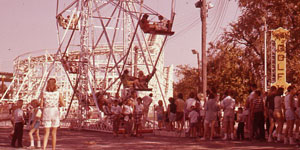 Ontario County is the home to several of the Finger Lakes and has always offered a diversity of recreational opportunities.  This presentation offers the audience a perspective of what the county has offered its residents and visitors over the years.  Steamboats transported people to the hotels and remote lake points for picnics and camping in the 1800s.  20th Century recreational opportunities changed to personal watercraft, public events at parks and the emergence of winter sports in the Bristol Hills.  (60 min program)

Geneva, Canandaigua, and
All Points in Between

Visit a time when the mighty railroad dominated passenger and freight transportation in Ontario County making no destination too far or too unreasonable. Learn how the railroads increased economic activity, tourism, and industry in Ontario County while providing employment for a large percentage of the County’s residents working in linked or related industries. The program looks at the rise and fall of the famous Lehigh Valley line, the New York Central, Auburn & Rochester, and others that passed through the Ontario County laden with passengers and freight destined for distant points. (60 minute program) 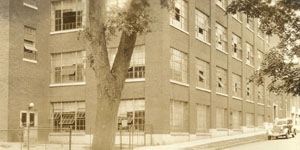 In addition to being the political and judicial hub of Ontario County, Canandaigua’s many industries also helped it to become the economic hub of the County as well. Take a pictorial look back at the many industries in Canandaigua’s 200 plus year history and see how Canandaigua residents have made their living from decade to decade.