Chris Hubler, President of the Ontario County Historical Society announced today that the Board of Trustees has named Canandaigua resident Marci Diehl to replace Edward Varno the long-time Executive Director of the Society who will be retiring in July. The 117 year-old organization’s mission is to preserve and promote the history of Ontario County.

Diehl will begin her job with the Society on May 1 and will work with Mr. Varno for 90 days to become familiar with the museum community, its staff and volunteers before assuming the full responsibilities of the Executive Director. Initially, she will work with Varno to plan the reopening of the museum and the promotion of their summer programming and exhibits. The Historical Society is currently closed due to the COVID-19 virus and, according to Varno should reopen in late May or early June.

Marci Diehl lives in Canandaigua. She is an award-winning community leader and public speaker with expertise in bringing professional and creative thinking to businesses and organizations. “We believe that Marci will be a great asset to the Society. Her experiences, community involvement and love of local history will make her an effective leader for the Historical Society.” said Chris Hubler.

Varno started at the Historical Society in 1995 and served in the role of the Executive Director for 25 years. Reinforcing its mission to preserve and promote the county’s history, Varno led a generation long effort to rebuild the organization’s staff, volunteer base and community relationships. His early and effective approach to marketing the Society in the Information Age recently gained him a New York State Museum Association award for innovation in leadership.

Varno plans to retire to his horse farm in Cheshire with his wife Vanessa, five horses, two cats and an Alpaca, named Baxter.

Christopher Hubler, President of the Ontario County Historical Society announced today that its Executive Director, Edward Varno will be retiring in 2020.

The long-time leader of the Historical Society made the announcement at the Society’s 117th Annual meeting held at Ferris Hills on Saturday. He will be leaving his position effective July 23, 2020. This will be 25 years do the day that Varno was hired to take the reins of organization. The Board of Trustees will be actively recruiting for a replacement in the coming weeks. A state-wide search is planned. 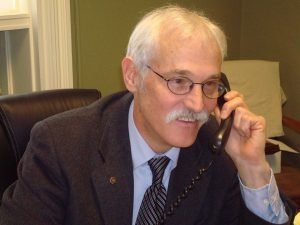 Varno became the Executive Director of the Ontario County agency on July 23, 1995 when the organization was struggling to find its place in the local and statewide history community. “The Society had basically lost its direction; and the staff was all but gone, laid off to be exact, and the finances were not in the best of shape”, Chris Hubler, the current Historical Society President commented. “Ed picked up the pieces and with a lot of hard work, unique ideas and community support he rebuilt the staff and created a welcoming atmosphere that made the organization a viable cultural institution for our county”.

Since Varno became Executive Director he has taken a creative approach to promoting local history and the Historical Society. Many unique events have been held but some of the most memorable were the Great Flag Rallies held annually in the early 2000s around the 4 th of July. In the 2002 for an event celebrating the Historical Society’s 100 th anniversary Varno found a Teddy Roosevelt impersonator and held a well-attended patriotic rally at the gazebo in the Canandaigua village square. Nearly 100 people attended. Many recall that Varno once dressed in depression era garb and sold pencils on the street to raise money for a payroll.

During the last 25 years, the Historical Society has also received numerous awards and recognitions from state and local agencies for their work in the field of community history. The Museum Association of New York in 2013 awarded the Historical Society’s a creative award for its Architectural Scavenger Hunt that was developed for the City of Canandaigua’s historic district. In 2016, the Historical Society received the Chamber of Commerce’s annual Tourism Award. More recently, the Society was recognized by the New York State Cultural Heritage Tourism Network for Curator, Wilma Townsend’s book “Votes For Women: The Suffrage Movement in Ontario County, New York”. Last year, Congressman Tom Reed presented a Congressional Proclamation to the Historical Society recognizing its placement of an historic marker in Canandaigua’s West Avenue Cemetery commemorating the life and accomplishments of the abolitionist, Austin Steward.

The current staff of the Society includes, Wilma Townsend, Curator, Preston Pierce, the Museum Educator, Maureen O’Connell Baker, Receptionist and Barbara Hill Part-Time Receptionist. Nearly 50 volunteers assist in the day-to-day operation of the museum and help in fund raising events. Many have been with the Society for 20 plus years and some even predate Varno’s tenure.

“25 years is a good run and it’s time”, Varno commented on his pending retirement. “I am proud of our team. Together, we have created a welcoming place where history, culture and the learning come together. We are grateful for the community support.” 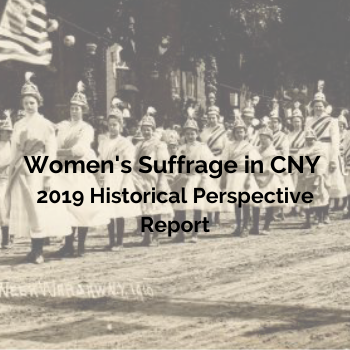 On August 26, 2020, the nation commemorates the passage of the Nineteenth Amendment to the U.S. Constitution, the one-hundredth anniversary of women’s suffrage in the United States. As part of the suffrage centennial commemoration, the Ontario County Historical Society sponsored this reconnaissance-level survey of historic sites relating to the suffrage movement in central New York, funded by Preserve New York (a program of the New York State Council on the Arts and the Preservation League of New York State).